We are pleased to announce that Bethesda Magazine has named Breads Unlimited the 2015 Editors’ Pick, Best Chocolate Chip Cookie!  If you haven’t tried one yet, be sure to stop by.  We bake our cookies fresh every day and would be happy to make extra for your bake sale or party – just give us a call.  Also try our new English Toffee Cookie – a new twist on the award winning original. 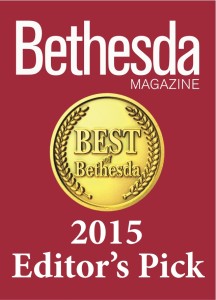 And while were in a bragging mood…check out what Bethesda Magazine had to say in the September/October issue last fall:

Get ’em while they’re HOT: Bethesda may be a latecomer to the Cronut craze, but Breads Unlimited makes a dynamite version of the croissant-doughnut hybrid that took New York City by storm in 2013. Created by the Dominique Ansel Bakery in SoHo, the Cronut is made with a layered dough that gives it a less dense texture than a regular doughnut. Since the name has now been officially trademarked, Breads Unlimited owner Steve Raab has a new moniker for the decadent pastry: “non-Cronut.”

Non-Cronuts, available in cinnamon sugar, glazed and chocolate drizzle, are $2.50 each and sold only on Friday, Saturday and Sunday mornings at around 8. They usually sell out by 10 or 11 a.m.